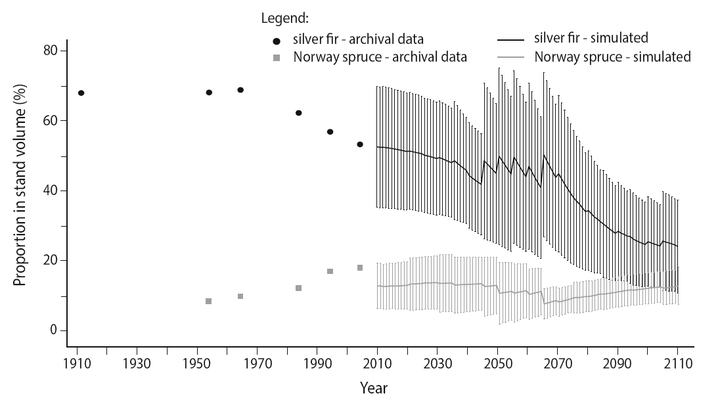 In the Dinaric Mountains, the future of silver fir and Norway spruce appears to be uncertain, especially given the threat of climate change to both species and browsing pressure on fir. Stand development of mixed Dinaric mountain forest in Slovenia was simulated for the period 2010–2110 using the ForClim model to explore the prospects of both target species under five management scenarios (business-as-usual, no management, single-tree selection, fir conservation and exclusion of browsing) and three climate scenarios (current climate and two climate change scenarios). Simulations under the current climate revealed a decrease in fir proportion from 53% in 2010 to 14–37% in 2110, while the proportion of spruce remained relatively constant (13% in 2010 and 9–13% in 2110). Climate change may intensify the decline of both species along an elevation gradient. An upward shift was projected for f ir in the observed period; in low-elevation stands (600–800 m a.s.l.), fir could almost disappear, while at high elevations (1050–1400 m a.s.l.), our simulations projected an increase in the proportion of both fir and spruce. No single management strategy proved to be significantly beneficial for either species. The most promising strategies were the fir conservation-oriented scenario and the exclusion of browsing; large ungulates strongly impacted the development of fir, but not that of spruce. Forest management affords different options for maintaining both species, but its capacity to prevent fir decline under climate change and high browsing pressure is limited. Concurrent measures of wildlife management and silviculture should be applied to maintain conifers in the studied forests