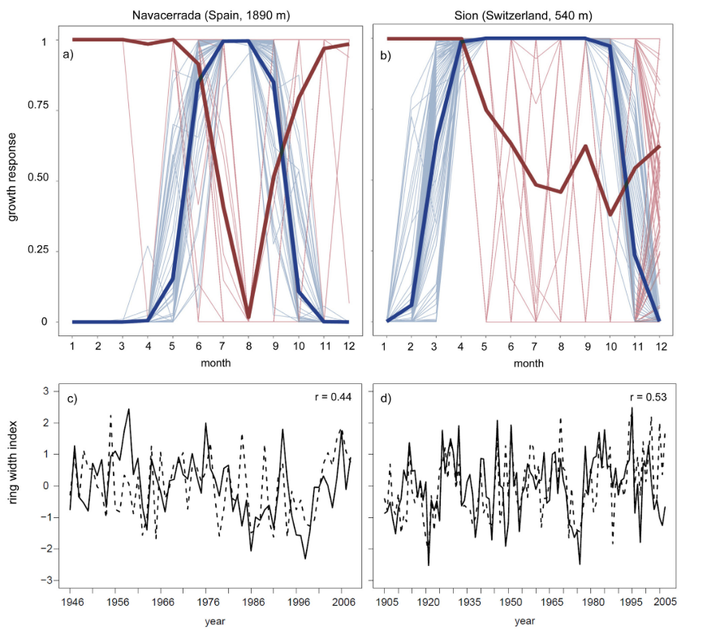 Drought is a key factor affecting forest ecosystem processes at different spatio-temporal scales. For accurately modeling tree functioning – and thus for producing reliable simulations of forest dynamics – the consideration of the variability in the timing and extent of drought effects on tree growth is essential, particularly in strongly seasonal climates such as in the Mediterranean area. Yet, most dynamic vegetation models (DVMs) do not include this intra-annual variability of drought effects on tree growth. We present a novel approach for linking tree-ring data to drought simulations in DVMs. A modified forward model of tree-ring width (VS-Lite) was used to estimate seasonal- and site-specific growth responses to drought of Scots pine (Pinus sylvestris L.), which were subsequently implemented in the DVM ForClim. Ring-width data from sixteen sites along a moisture gradient from Central Spain to the Swiss Alps, including the dry inner Alpine valleys, were used to calibrate the forward ring-width model, and inventory data from managed Scots pine stands were used to evaluate ForClim performance. The modified VS-Lite accurately estimated the year-to-year variability in ring-width indices and produced realistic intra-annual growth responses to soil drought, showing a stronger relationship between growth and drought in spring than in the other seasons and thus capturing the strategy of Scots pine to cope with drought. The ForClim version including seasonal variability in growth responses to drought showed improved predictions of stand basal area and stem number, indicating the need to consider intra-annual differences in climate–growth relationships in DVMs when simulating forest dynamics. Forward modeling of ring-width growth may be a powerful tool to calibrate growth functions in DVMs that aim to simulate forest properties in across multiple environments at large spatial scales.