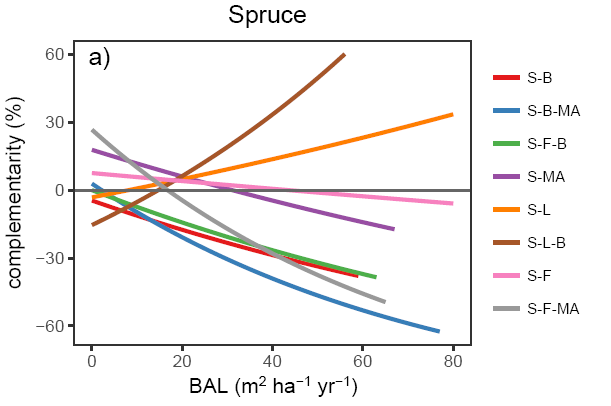 Mixed species forests can often be more productive and deliver higher levels of ecosystem services and functions than monocultures. However, complementarity effects for any given tree species are difficult to generalize because they can vary greatly along gradients of climatic conditions and resource availability. Identifying the conditions where species diversity can positively influence productivity is crucial. To date, few studies have examined how growth complementarity across species and mixture types is modulated by stand and environmental factors, and fewer have considered more than one or two factors. We investigated how complementarity effects for several major Central European tree species change with climatic and edaphic conditions, and with stand structural characteristics, including species composition. We used data from the Swiss National Forest Inventory, which is based on 3,231 plots of pure and mixed stands (19 mixture types) across a broad environmental gradient, to test (i) how mixing effects change depending on the identity of the admixed species and (ii) if complementarity consistently increases when environmental conditions become harsher. The magnitude, whether positive or negative, of complementarity increased with increasing stand density and stand developmental stage, but no general pattern could be identified across mixture types. Complementarity for many species increased as drought intensity and temperature increased, but not for all species and mixture types. While soil conditions, nitrogen and site topography influenced complementarity for many species, there was no general pattern (increases and decreases were observed). Synthesis . Our study indicates that complementarity varies strongly with stand density and stand development as well as with topographic, climatic and soil conditions. This emphasizes the need to account for site‐dependent conditions when exploring mixture effects in relation to forest productivity. We found that under certain conditions (i.e. increasing drought, higher temperature), mixed forests can promote individual tree growth in Central European temperate forests. However, careful assessments depending on the species composing the stands are required under changing resource availability as well as under different levels of stand density and development.